An excerpt from From Tommy Rivers Puzey (Tommy Rivs’) blog: as he observes James from the field:

There was a unity and a fire that radiated through the crowd. It was as if every stride was a message – a collective action that symbolized a shared internal conviction. It was the same conviction that moved each of them… to wake up this morning and accompany the Iron Cowboy. Each had overcome their discomfort, and silenced the voices inside that encouraged retreat.

An excerpt from my Day 42 blog:

No commentary today other than you’ll see two swim files…

I have been put to shame. In my defense, endurance coaches are not known for their philosophy. I can talk physiology, physics, maybe even psychology. But poetry? I’d have to charge extra for that. 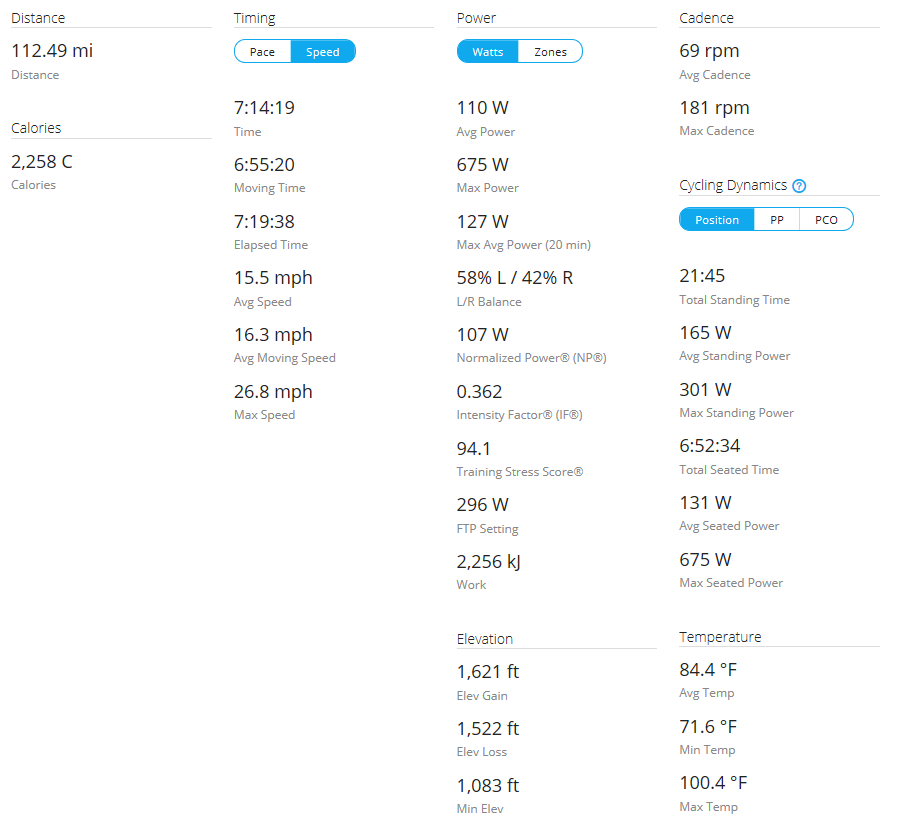 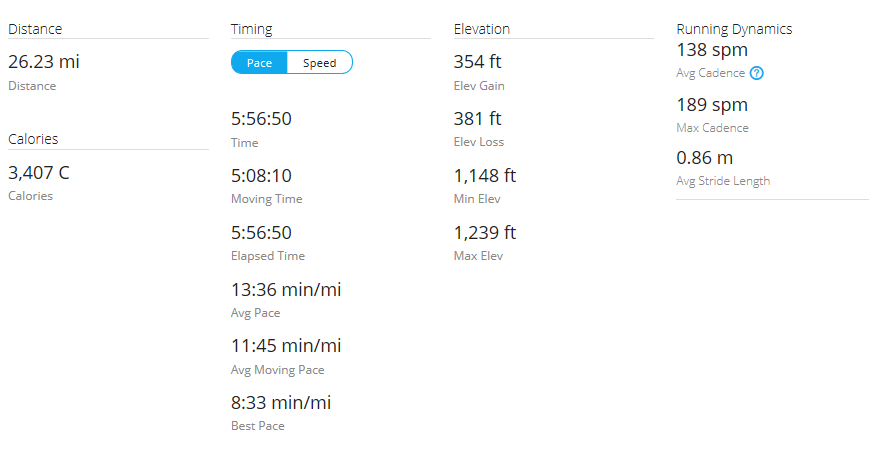 I’m often asked how I developed James’ training plan. I could write a few chapters about this (someday I might), so I’ll give you a version that’s as long as I have time to write this evening.

I’ve coached many athletes participating in various multi-day events. The 505050 was obviously unique. The foundation was really laid when we we completed his 2012 Guinness world record for most Ironman events in a year. In fact, the 505050 was originally scheduled for 2014, but James wisely delayed it for a year to recover from 2012.

There is very little creativity in what I did to prepare James. I used a strict periodization plan with a brutal Specific phase. It was the same template I used for athletes doing Marathon de Sables, Ultraman, Bosphorus, or Haute Route. This methodology has never let me down, propelling my athletes to become Ironman qualifiers, 70.3 qualifiers, Boston qualifiers, world record holders, and National Age Group championships.

It was technically only an 8 month plan, but James had spent all of 2013 and 2014 building a huge base. In October 2014 we began his formal General training for the 505050. Nothing but Zone 2 or Zone 4+. VO2 intervals, cross fit, strength training. Lower volume but high intensity. The purpose was to get his VO2, Muscular Endurance, and Strength at the best they had ever been. In fact, he hit his career highest 30 minute power of 295 in late December. We didn’t touch Zone 3 until late February (Zone 3 is poison if adopted too early in a training program). This period varied very little from what I would have done to prepare an athlete for a single-day Ironman event.

My late March we had transitioned from the General to Specific phase, and the real training began. Tons of Zone 2, high volume, reduced or eliminated Zone 4+. 50k trail runs. 70.3 races as a recovery day. Running 2 hours in the morning and 2 hours at night. Week after week of 30 or more hours of training a week. But, most importantly, three to four days in a row of 7-9 hour bricks. The specificity required for the 505050. A very specific taper, and he was ready to go.

If I were to do it again, I would have had him do absolutely no Zone 3 for the entire 8 month plan. Zone 3 was worthless for this endeavor. I had James in heavy Zone 3 rotation for 4 weeks in April. Looking back now I was far too optimistic about often that intensity would be called upon in the 505050. Zone 1-2, heavy (heavy) volume, and blocks of multi-day bricks was all he needed for the Specific phase. 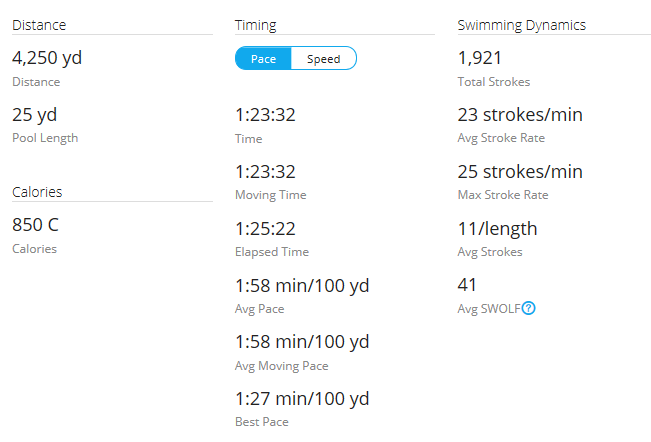 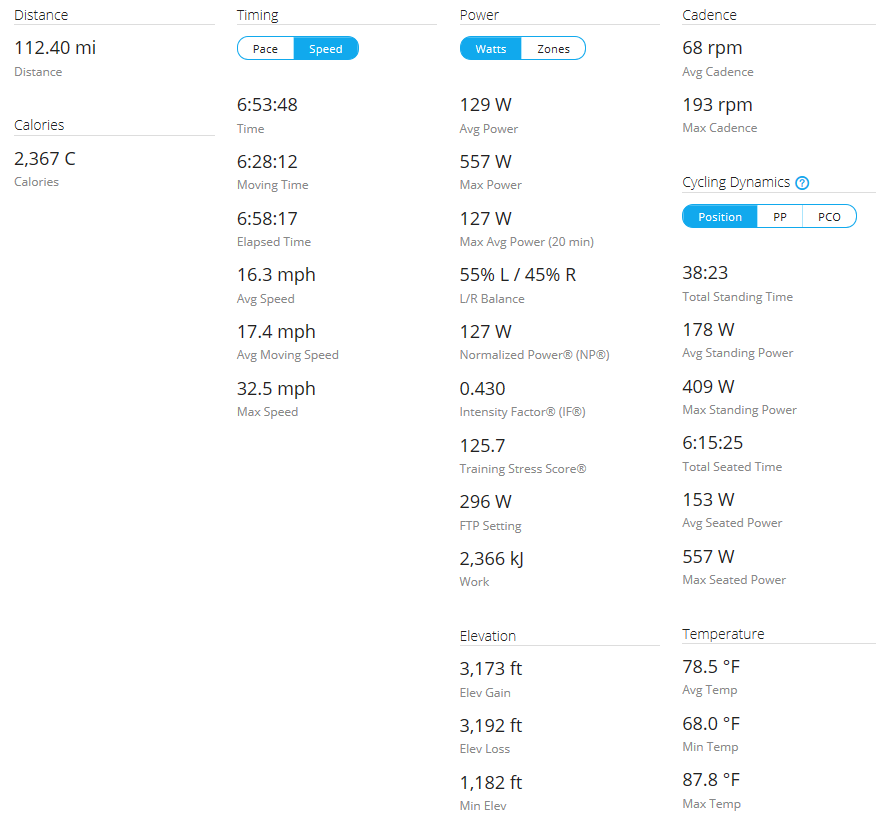 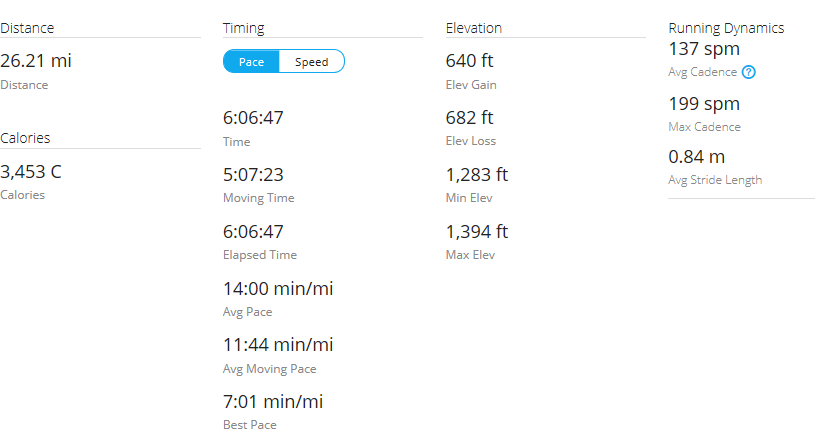 Hot and windy, and the total time reflects that. James’ slowest day since Day 34, a day James reported feeling more exhausted than he had in weeks.

I was browsing through James’ Garmin Connect profile, and came across this “Badges” section. C’mon, Garmin! You’re going to have to come up with a bigger badge for James! 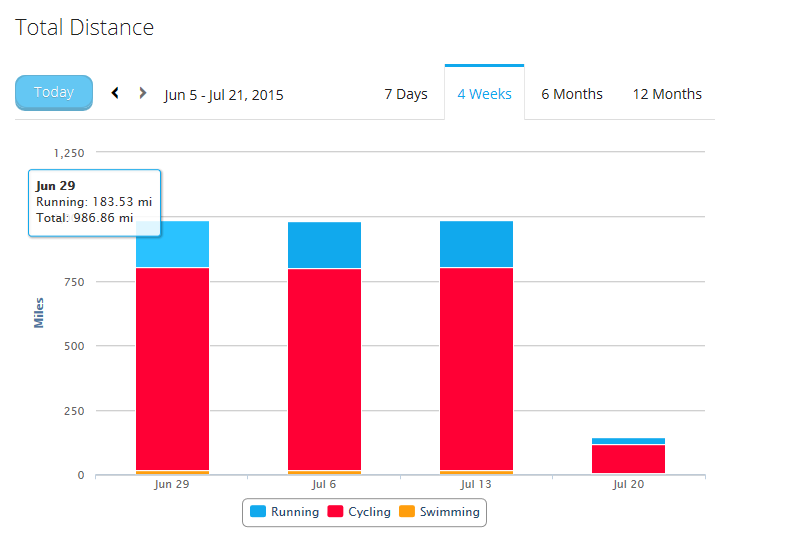 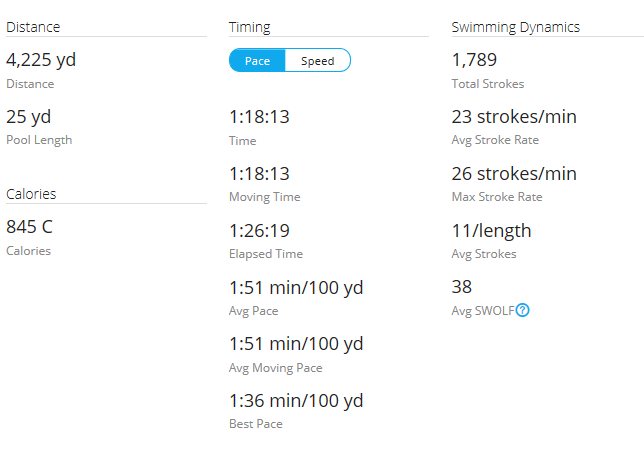 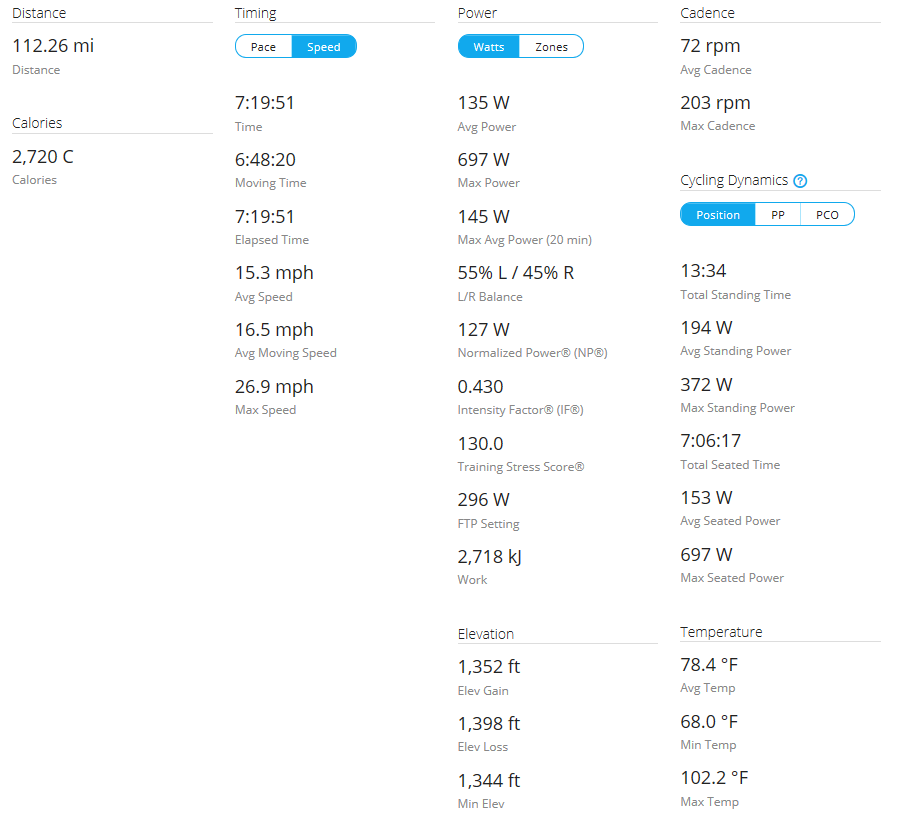 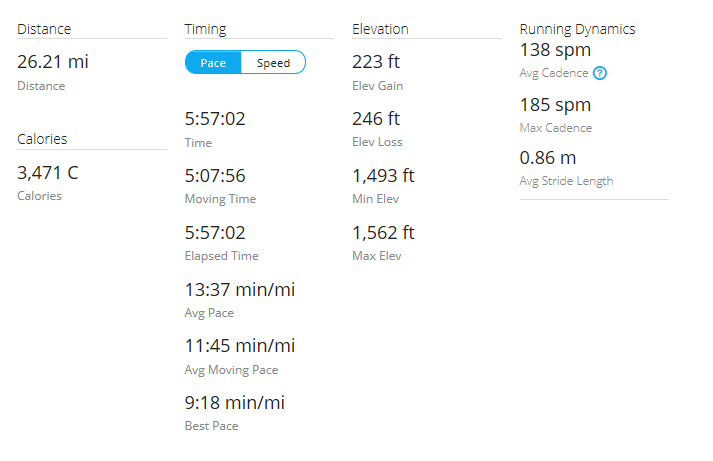 I’m going to encourage James to NOT try and bust out a killer time on the last few days. Nothing left to prove. However, wouldn’t it be fun to see what he can do now if he went for an all-out time? His FTP is probably shot, but give me 3 months and I’ll have him with a power to weight ratio of 4.25. 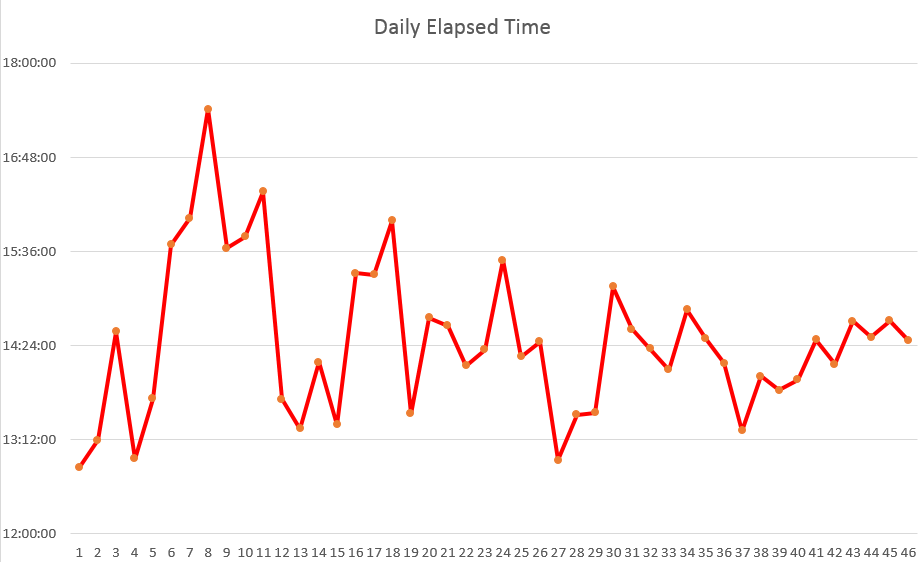 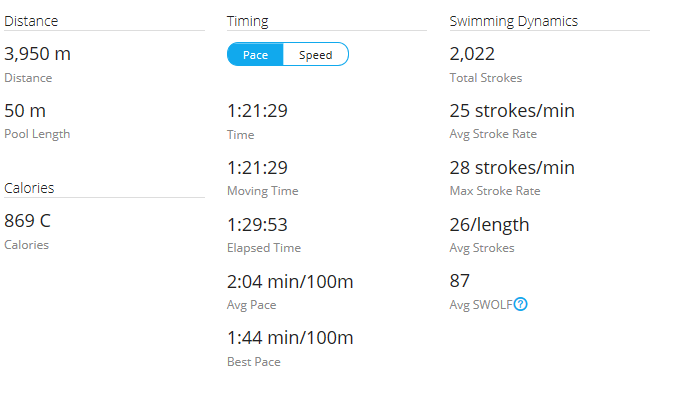 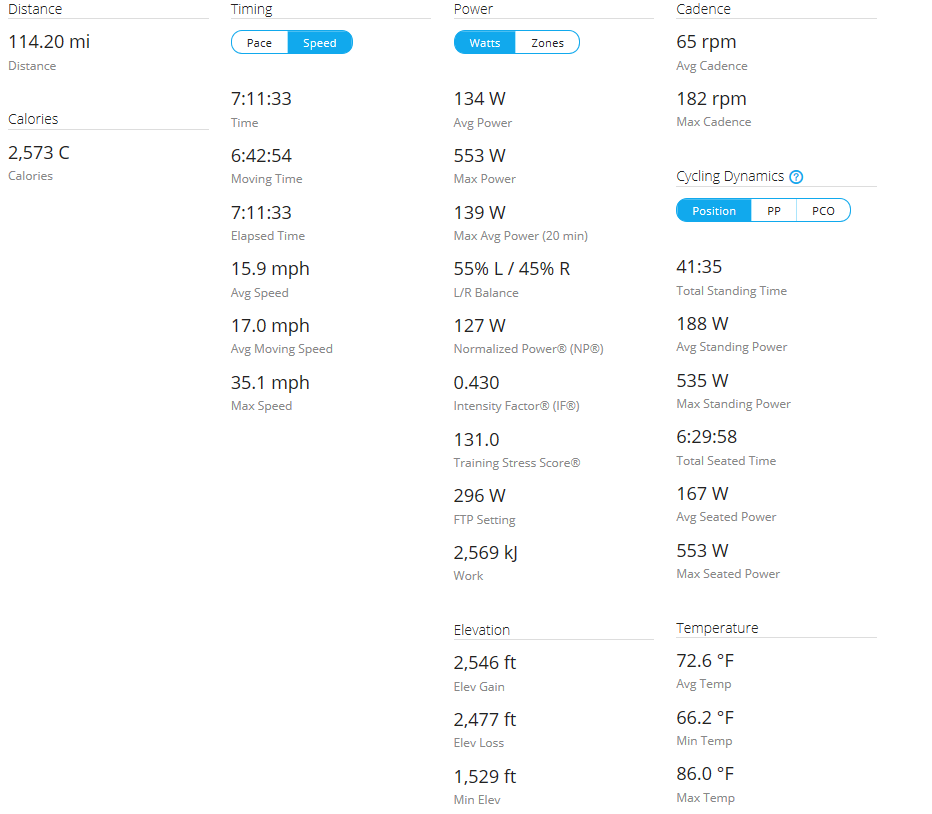 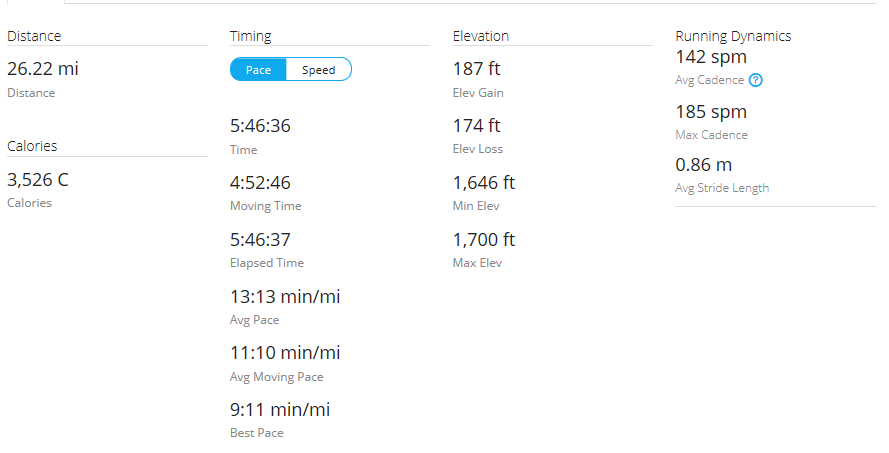 Below you’ll find a separate chart for his daily swim, bike, and run. Notice how in each discipline, James struggled to find his pace, but that at about Day 20, he began to normalize (if you disregard the two river swims).

Late last night James asked me to make some calls for him, and in my state of (relative) fatigue I asked if maybe it would be best if he made the calls. He reminded me that he was “sort of busy” at the moment. Sheesh. Prima donna. 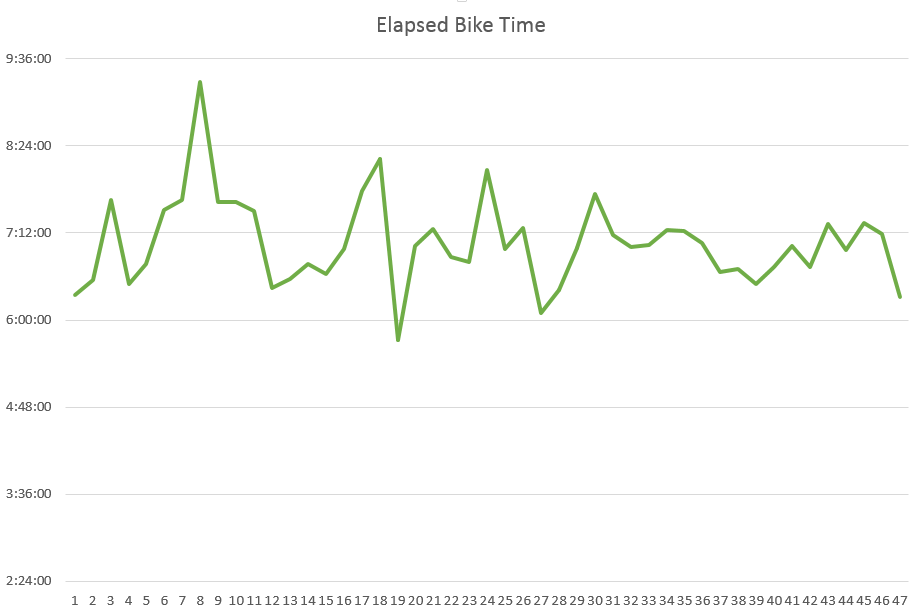 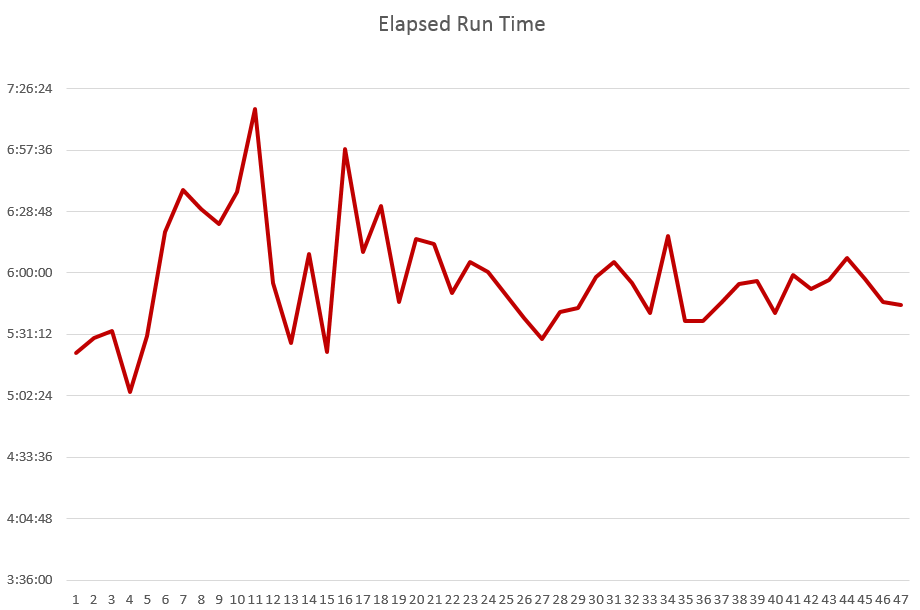 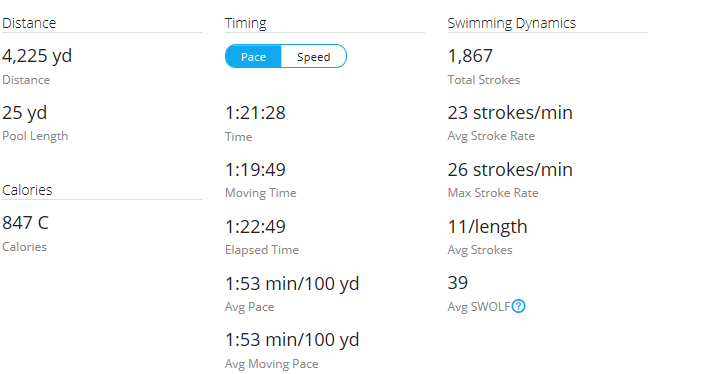 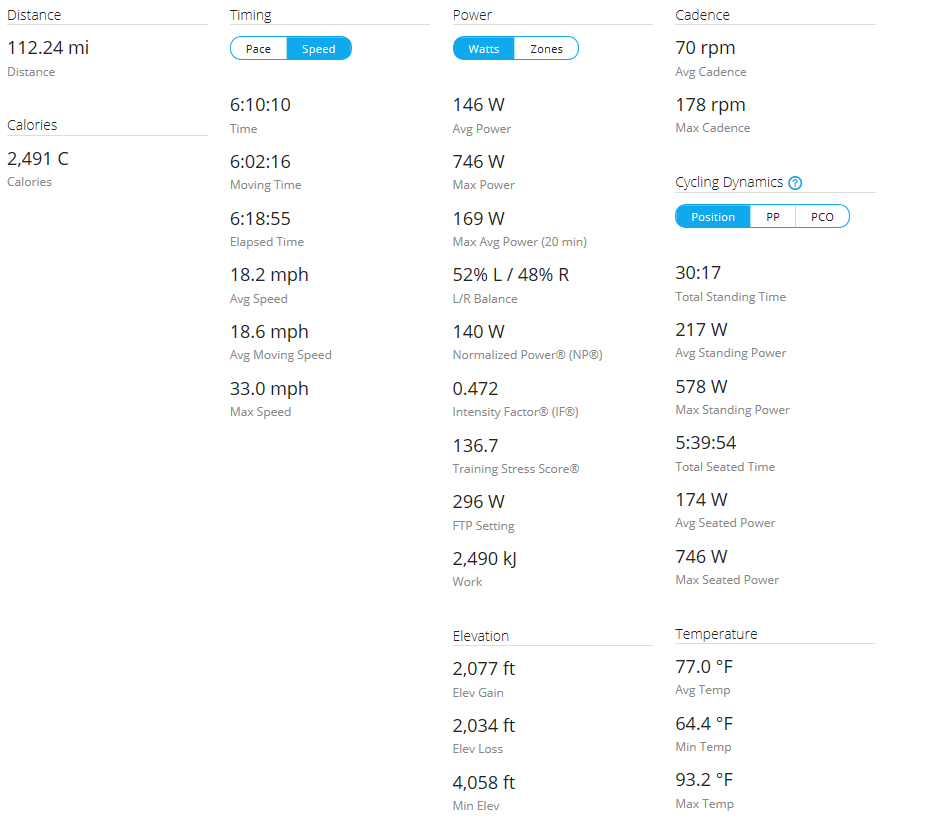 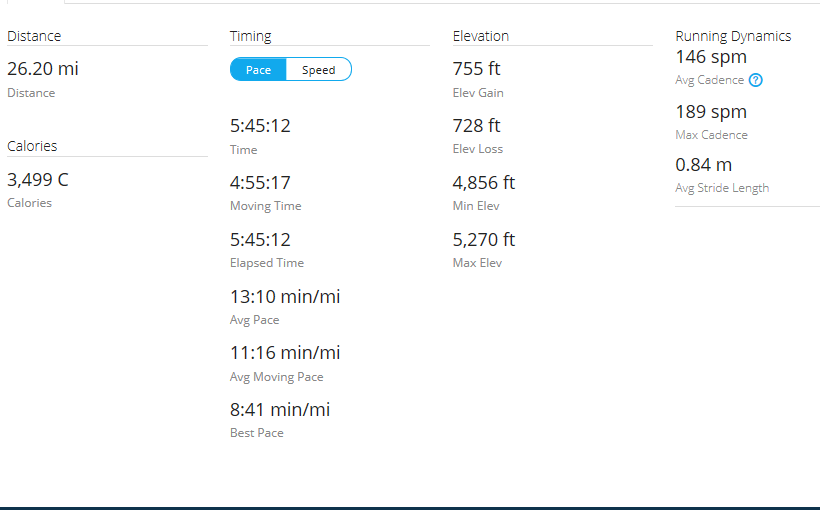