Day 19 presented a significant dilemma. The crash on Day 18 aggravated James’ hip to the point he could not walk after the bike today.

James asked me my thoughts on the elliptical and I approved. As his coach, I am confident in the decision in looking 31 days ahead. As a quasi-PR rep doing his blog, I now have regrets. I’m a competent coach, but apparently a lousy manager.

There was no effort to hide this. He was surrounded by followers at the gym, and posted two pictures of himself the elliptical on his Facebook account. In retrospect, his team, including me, was naive in how this would be perceived. At the very least, a statement should have been made prior about James condition and decision. His followers deserve at least that.

To exacerbate the problem, James did not have HR data for the elliptical. While it would not have been satisfactory, it might have helped reconcile his followers.

So, speaking for myself, I apologize for my part in the decision. I recognize the disappointment this will cause.

Where do we go from here? Is the 505050 over? I think you will have to decide that. My opinion is that James deserves a yellow card, and that this endeavour, while now scuffed, still has a lot of luster remaining.

Edit from original post, James released the following statement shortly after I posted this blog:

“Regarding the use of an elliptical on day 19, first I want to thank the thousands of followers who have supported me, both virtually and in person, as we complete the 20th day of this adventure. It would have been impossible to reach this point without your encouragement.

A crash from Day 18 subjected my hip to a worse condition than originally diagnosed. After 18 days of the 505050, I knew from experience this particular injury would likely prohibit even walking, or strain it to the point of jeopardizing the remaining 31 days. Faced with ending the project, and consultation with my team, I approved the suggestion to use an elliptical for the marathon as an alternative.

In retrospect, I clearly see how this decision was problematic and at the very least naïve in how it would be received. Decision making in this low-sleep, high-stress, time-constrained environment has proved challenging, and I fear that environment interfered with how we managed the situation.

The use of the elliptical was inconsistent with my stated goal on Facebook of “50 Ironman Courses, in 50 consecutive days, through all 50 States.” Although there was no effort to hide the decision (which was highly visible on both on our Facebook and blog page), we should have been more open about the decision to the Iron Cowboy community.

I apologize for this mistake. The elliptical use reduces the credibility of the 505050. Physically, it does not have the same demands as a run/walk. Mentally, I found almost 6 hours on that machine the hardest marathon I’ve ever done. I recognize many of you are disappointed with this development, and many may even consider the project over. From my perspective, I still have a a lot of work to do. I hope you will consider this my “yellow card” and continue with me on this historic journey.”

Elliptical data follows. The reader will find that the data is similar to his run/walk marathons, but of course it is just not the same thing, and does not fatigue in the same way as a run/walk would do. 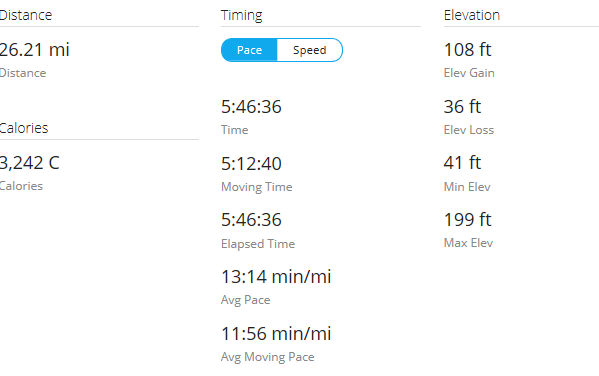 As we mark Day 20, I’d to express my appreciation to James’ supporters, on this blog and via other mediums. I appreciate that you understand the “big picture” of this goal. Supporting James, often defending James, means the world to him. The thought of disappointing you gets him out of bed each day.

At the same time, I want to come to the defense of the critics and skeptics. They keep us honest. They pave the way for an even better 505050 in the future. Some of their feedback is right. The tone has not always been productive, and I wish sometimes that the point could have been made more elegantly and less personally. There’s a fine line between critic and hater, but it can be navigated by some. The current and any other 505050 attempt will be shaped by both the positive and critical feedback.

James’ swim was a pleasant surprise considering the 2 hour swim on Day 19 with the shoulder issue. That is almost back to his median swim time of 1:23.

James recovers faster than anyone I have ever met. He’s like the Wolverine of endurance sports.

Bike power data is certainly not right today, but an early peak at his live bike for Day 21 shows the issue has been addressed (I always write the blog the day after he finishes, it’s like peering into the future when I write these). My guess is that if the Garmin expects data from two pedals, but only gets it from one, we have this issue. Double his power from 58 to 116, and that’s about right. Note that left/right balance is 100% on the right, which bolsters the theory that the left pedal was not sending.

Can we talk James’ tatoos? Anyone have a bead on how many he has? I swear I see a new one with each FB post. Same with his kids, I think I’ve got them all down and then another one pops up in a picture. 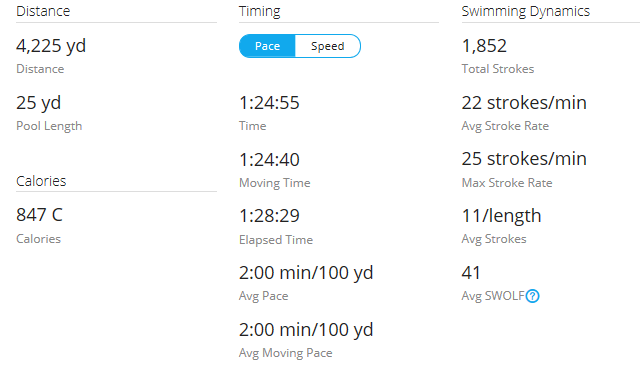 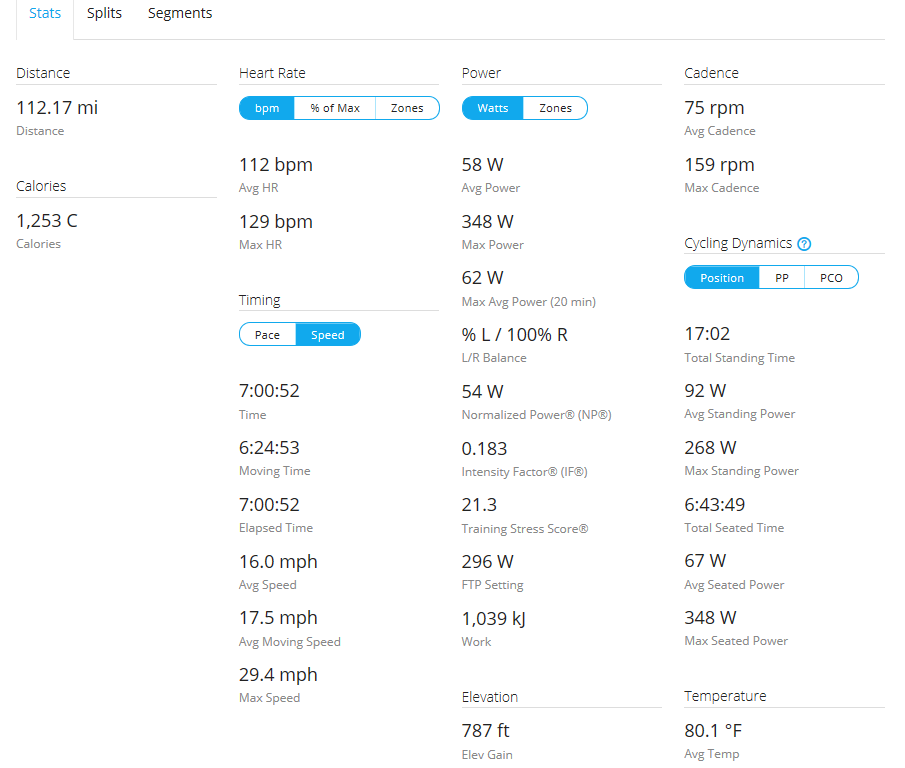 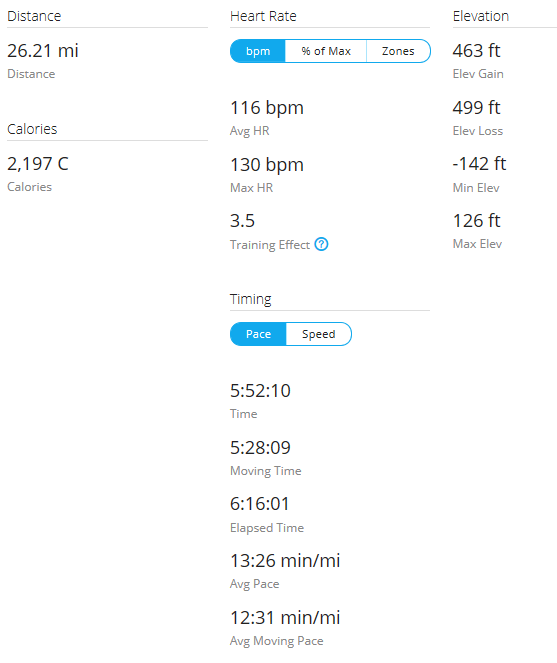